I want to preface my thoughts on What Grandma Would've Said (http://www.oocities.org/soho/7539/) with the caveat that this site is not really a beautifully-designed one. Unlike the other websites I have chosen to discuss here so far, this one is very simple in both its visual design and content. Still, I think it is a touching and memorable website, and offers an interesting case study of a GeoCities website based on a personal tribute to real people.

I see the websites discussed here at GeoCities Memory as personal shrines of sorts. Whether dedicated to a religious figure or movement, a type of art or literature, or a family member, the GeoCities websites that I find most fascinating can all be considered digital monuments to some very personal devotion. Whether or not these sites also share personal details of their creators doesn't matter; the identities of these people are eclipsed by their interest in the object of their study, or in some cases, love. 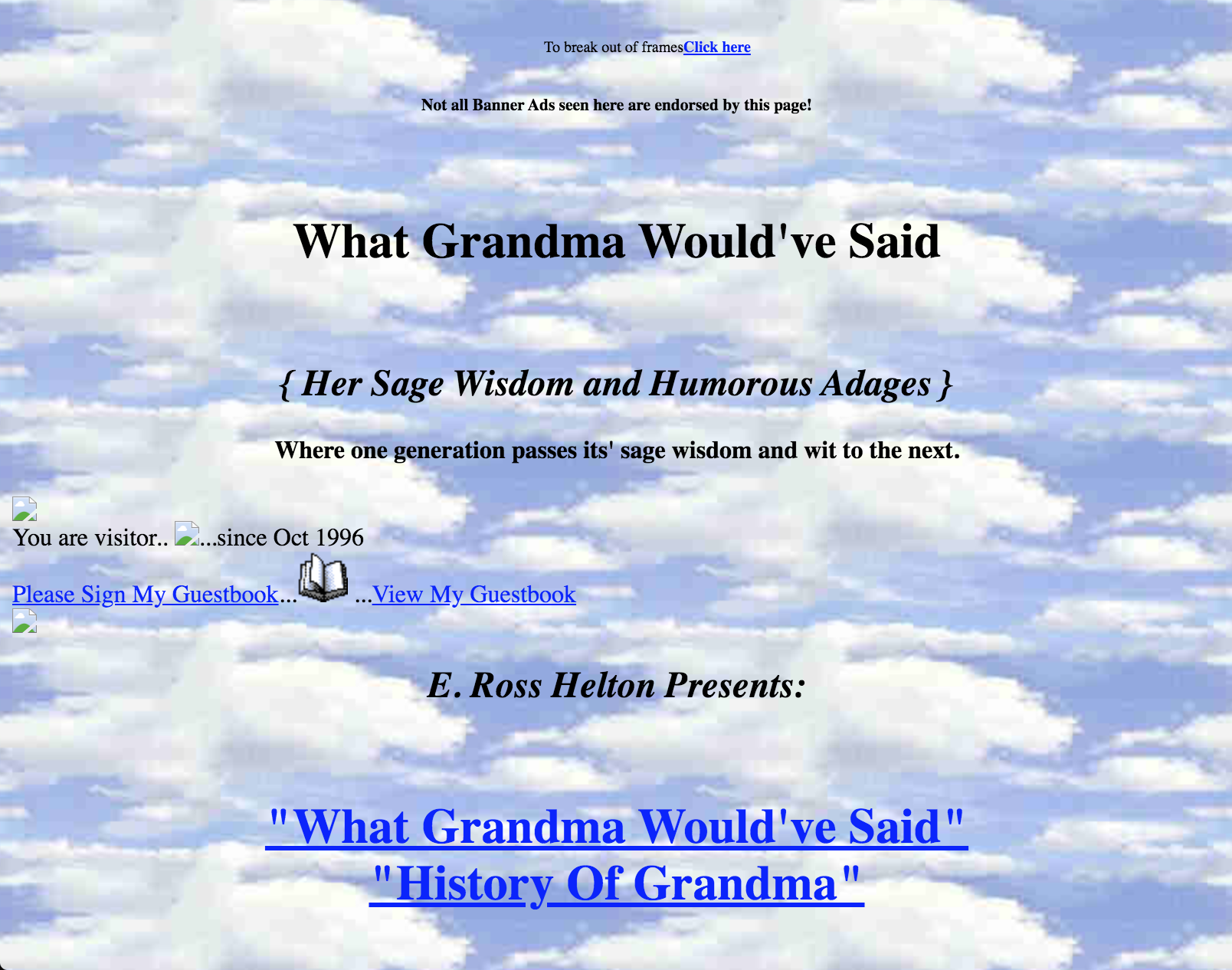 In the case of Grandma, it's clear that this website's creator E. Ross Helton was motivated by a deep love for his grandmothers. Ross shares that he was inspired by both of his grandmas, and so the "Grandma" of What Grandma Would've Said is a persona created from his memories of the "sage wisdom and humorous adages" of these two individual women. The past tense leaves us to assume that neither Grandma was still living when Ross made the website. The cloud backgrounds, which are pixellated in a rather striking way, also remind me more than anything of heaven.

What Grandma Would've Said is plainly structured, built more like a book than a website. This was the case for many homemade sites at this time (based on the guestbook, the site dates from 1997 to 2000). What Grandma Would've Said consists of a list of themes ("Standing Still," "Doing What You Can") on which the proverbial Grandma shares a funny or profound aphorism, contextualized by what we can assume are real anecdotes from Ross' childhood.

In some cases, Ross reflects on what Grandma would have said to his own children. This again supports my theory that both grandmothers had already passed away when Ross decided to build this page. In this way the site has the feeling of a memorial, a way of honoring the memory of Grandma(s). 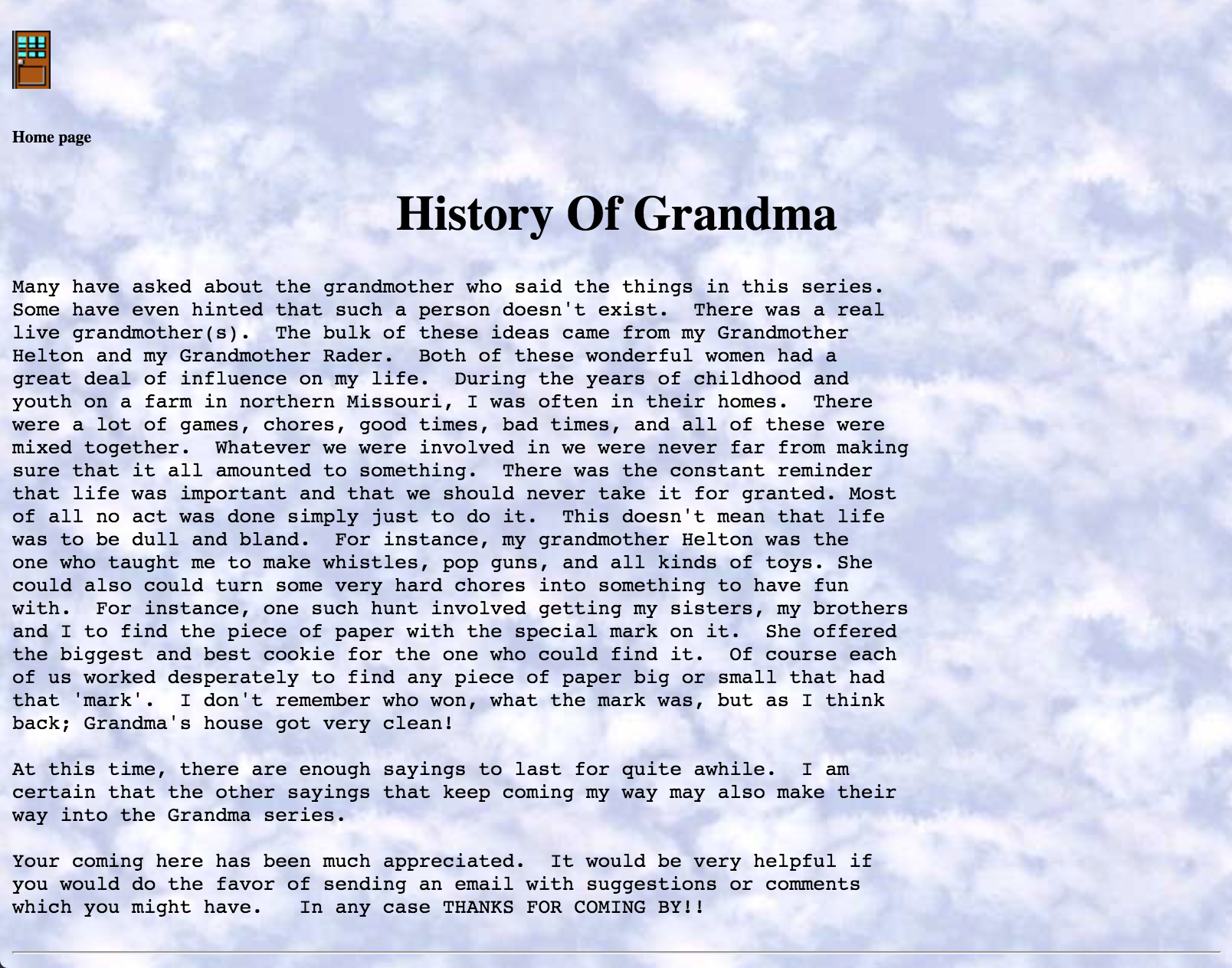 I find the History of Grandma page particularly poignant, especially Ross' description of his time growing up with his grandmothers:

During the years of childhood and youth on a farm in northern Missouri, I was often in their homes. There were a lot of games, chores, good times, bad times, and all of these were mixed together. Whatever we were involved in we were never far from making sure that it all amounted to something. There was the constant reminder that life was important and that we should never take it for granted.

As is often the case on GeoCities, Ross also includes some seemingly unrelated pages on this website. A small image on the homepage takes you to a page with photos (a selection has been shared on this page), completely devoid of context. There is also a page for awards the site has won, which does make more sense, although it also feels a bit funny on a memorial website. 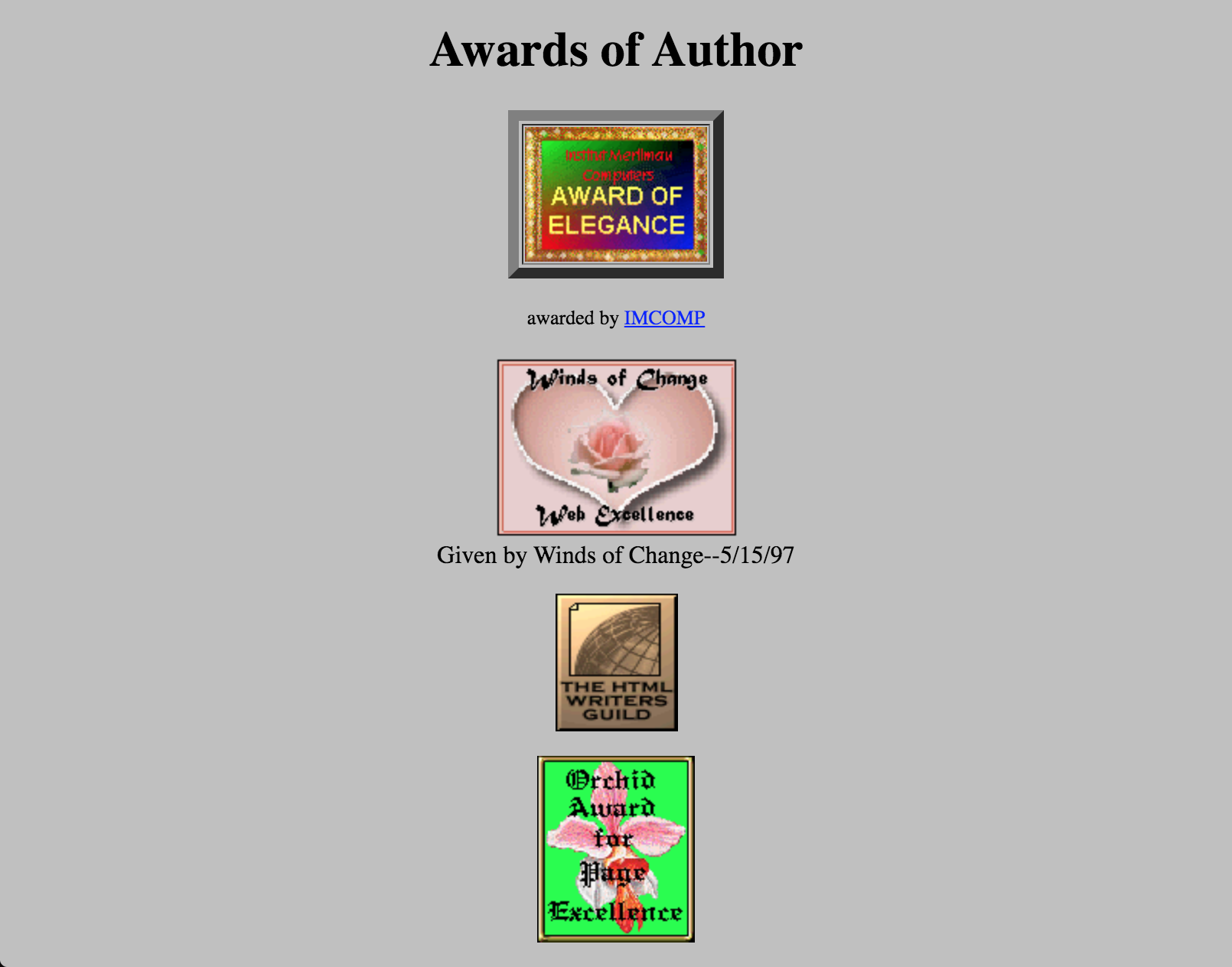 Fascinatingly, on the History of Grandma page reproduced above, Ross actually admits to the fictionalization of the Grandma stories and quotes on the site, even as he assures visitors that "there was a real live grandmother(s)." I find this an interesting example of the way in which reality and fiction can blur together online, especially on GeoCities websites.